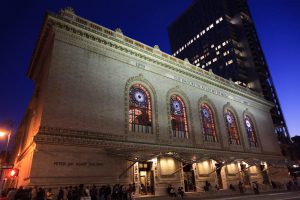 American Vaudeville was a form of variety entertainment prevalent in the United States from the 1880s to the early 1930s. A typical Vaudeville show comprised about a dozen separate theatrical acts, possibly including dancers, acrobats, singers, comedians, magicians, strongmen and trained animals. The sheer diversity of Vaudeville distinguished it from earlier forms of variety show.

Vaudeville was the American equivalent of the music halls and variety theaters in England, which were popular from Victorian times until the 1950s. Some notable British artists passed through Vaudeville, such as Sir Harry Lauder and Stan Laurel.

Depending on where you went for entertainment, Vaudeville was either clean or risqué. As you’d expect, bawdier acts tended to appear in beer halls and burlesque houses, but you could always go to an amusement park or town hall for family-oriented theater shows. Initially pandering to the middle and upper classes, Vaudeville ended up crossing all social divides.